Scientology Landing Strip/UFO Base in NM.

Scientology Landing Strip/UFO Base in NM.

A Place in the Desert for New Mexico's Most Exclusive Circles

Maybe. From the state that gave us Roswell, the epicenter of UFO lore since 1947, comes a report from an Albuquerque TV station about its discovery of strange landscape markings in the remote desert. They're etched in New Mexico's barren northern reaches, resemble crop circles and are recognizable only from a high altitude.

The circles etched into the desert match the logo of the Church of Spiritual Technology, a Scientology corporation. (Krqe-tv)


Also, they are directly connected to the Church of Scientology.

The church tried to persuade station KRQE not to air its report last week about the aerial signposts marking a Scientology compound that includes a huge vault "built into a mountainside," the station said on its Web site. The tunnel was constructed to protect the works of L. Ron Hubbard, the late science-fiction writer who founded the church in the 1950s.

The archiving project, which the church has acknowledged, includes engraving Hubbard's writings on stainless steel tablets and encasing them in titanium capsules. It is overseen by a Scientology corporation called the Church of Spiritual Technology. Based in Los Angeles, the corporation dispatched an official named Jane McNairn and an attorney to visit the TV station in an effort to squelch the story, KRQE news director Michelle Donaldson said.

McNairn did not respond to messages requesting comment; an employee said that McNairn was traveling last week, and that no one else from the church would be able to comment.

What do the markings mean? For starters, the interlocking circles and diamonds match the logo of the Church of Spiritual Technology, which had the vault constructed in a mesa in the late 1980s. The $2.5 million construction job was done by Denman and Associates of Santa Fe, but company Vice President Sally Butler said of the circles, "If there is anything like that out there, it had nothing to do with us."

Perhaps the signs are just a proud expression of the Scientology brand. But there are other, more intriguing theories.

Former Scientologists familiar with Hubbard's teachings on reincarnation say the symbol marks a "return point" so loyal staff members know where they can find the founder's works when they travel here in the future from other places in the universe.

"As a lifetime staff member, you sign a billion-year contract. It's not just symbolic," said Bruce Hines of Denver, who spent 30 years in Scientology but is now critical of it. "You know you are coming back and you will defend the movement no matter what. . . . The fact that they would etch this into the desert to be seen from space, it fits into the whole ideology."

Recall if you will that Scientology traces most of mankind's woes to an evil alien lord named Xenu, a galactic holocaust perpetrated 75 million years ago, and, uh, the field of psychiatry. (The latter is a particular concern, as all of America now knows, of movie star Tom Cruise.)

The church maintains two other vaults in California to preserve Hubbard's materials and words, according to Hines and another longtime staff member who also quit a couple of years ago, Chuck Beatty of Pittsburgh.

"The whole purpose of putting these teachings in the underground vaults was expressly so that in the event that everything gets wiped out somehow, someone would be willing to locate them and they would still be there," said Beatty, who spent 28 years in Scientology. Some loyalists are tasked specifically with the "super-duper confidential" job of coming back to Earth in the far-off future, he added.

The billion-year contracts are signed by members of what Hubbard, a Navy lieutenant in World War II, called the church's Sea Organization. The motto of that cadre, according to Beatty and Hines, who said they were both members, is "We come back."

I'm currently working with my architectural contacts to see If I can get plans and any other information that may be useful for our cause.

My dad loves to look things up on some of his topo software and found a higher resolution picture than you will get on Google Earth. 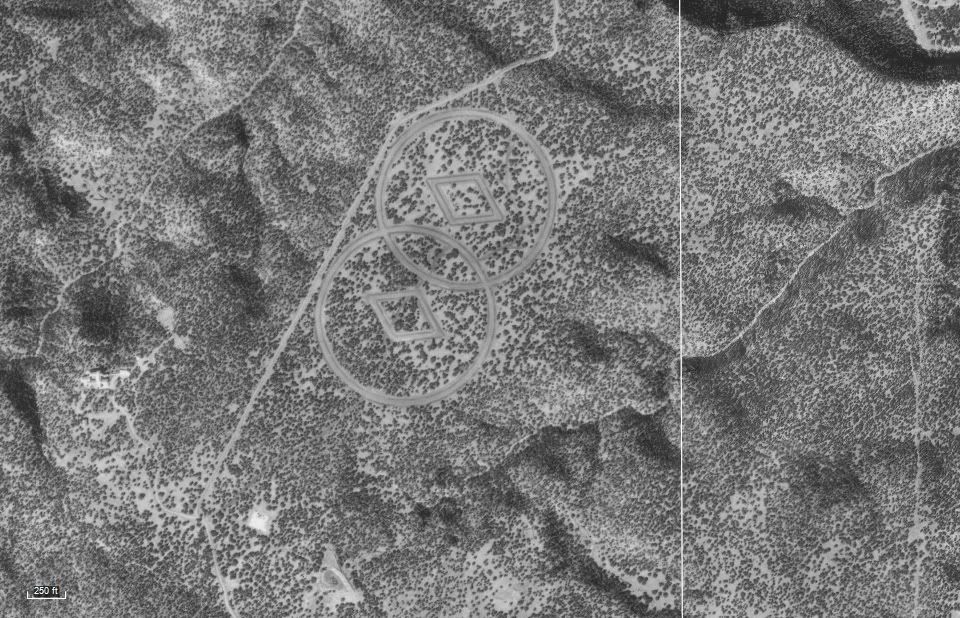 I'll see if he can get some other ones, specifically of the airstrip and roads up to it.

If we could find to coordinates to this place, maybe we can get somebody to take pictures. Id be great to get one from like a plane or a helicopter...as long as the pilot does his best to not let the $cifags get a hold of his plane's serial #. just imagine what kind of damage we would do them if the public knew that they were building a vault in the middle of nowhere, and are extremely secretive about it. dont you think that the public would be suspicious of what the Church of Spiritual Technology is doing there? I bet that might keep some people from joining the cult.

The knowledge is public - 20/20, CNN, and a few other news outlets have done fly-overs of this place and reported on it. I'm more curious as to what they have buried in shallow graves here...

Anonymous51493862 wrote:The knowledge is public - 20/20, CNN, and a few other news outlets have done fly-overs of this place and reported on it. I'm more curious as to what they have buried in shallow graves here...

Its supposed to be the writings of L. Ron on steel encased in titanium, or some shit like that. The symbol is for the person when they return or whatever to know where to return to Earth so it gain that knowledge again. Something about that seems like pure bullshit. I'm curious as to what is really going on there, too. Somehow, something with a link to the outside needs to get into with a video and audio feed.

...or boobies. Take your pick.

...or boobies. Take your pick.

We wish. But sadly, there is nothing but thetans thar.

I read a rumor somewhere that people were thinking Davey the Dwarf was going to use this place as a hideout...bunker and all that. He may need it if he doesn't change his ways. There may be a big revolt in his future. Didn't Hitler end up in a bunker at the end?

I also read somewhere that the government had taken over some of the land. Can't remember exactly what was said. I think I found it after googling Scientology & NM.

It's possible DM is already hiding out there......

professa wrote:It's possible DM is already hiding out there......

kaos,
Wow, just listened to that interview. If Larry has a bunch of people lined up willing to talk then $cilontology is going downnnnnnnnn!!! Anonymous had everything to do with this. You people should be so proud. Thanks for all the hard work you have done. It's not quite over but there's a real end in sight imo!

Similar topics
» Scientology's ABQ building is for sale?
» Links to Scientology in the News